Oops! It appears that you have disabled your Javascript. In order for you to see this page as it is meant to appear, we ask that you please re-enable your Javascript!
SCENE

A symposium about “What to teach in programming classes, and how to teach it”

In 2017, Primo Toys launched the “Early Education for Tomorrow” together with the NPO CANVAS. Primo Toys sets itself the goal to supports children’s independence, to convey the joy of trial and error, and researches how to learn to be able to feel the power to create something.

On the 1st of August 2019, the third annual symposium was held under the motto “What to teach in programming classes, and how to teach it”. 30 educators from different schooling levels including kindergarden teachers as well as educators working for universitites or programming schools participated in the event.

Mr. Soichiro Hirai, who has a background of serving as an ICT education advisor for the Ministry of Education, Culture, Sports, Science and Technology and the Ministry of Internal Affairs and Communications as a regional informatization advisor, served as the moderator of a panel discussion between three educators from public elementary schools.

Panel discussion – what to teach in programming, and why 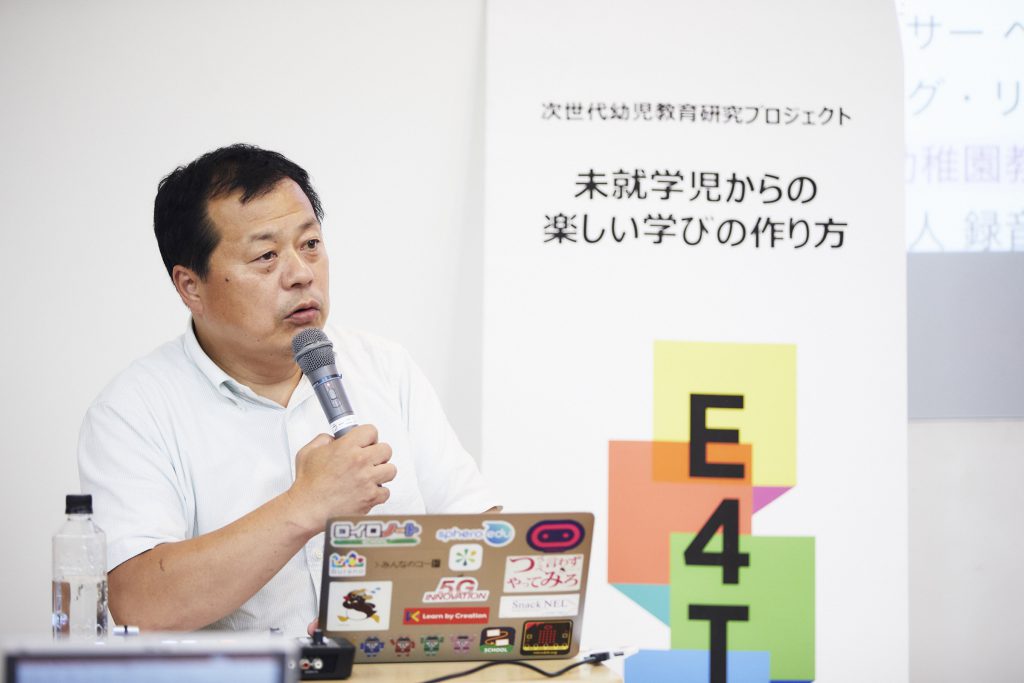 At the beginning of the panel discussion, Mr. Hirai suggested to use a tool that can display the opinions of participants on the spot. By using this tool, it was found that there are many teachers who are worried about the ICT environment, a lack of understanding of fellow teachers and supervisors in their institutions, budget acquisition, and what to start with when planning a programming course schedule.

Although the three teachers who were on stage had similar problems, they shared their experience and explained that they did not aim for a perfect curriculum from the beginning; instead, they started with whatever was possible and showed the results to the other teachers in the school to gain support one by one. Using a trial and error method, a lot of experience could be gained. The recommendation was to use tools that the participants are already familiar with, so that they do not have to invest much time to learn a new program, as well as tools that do not need much recharging, as the handling get complicated. During the panel discussion, the pros and cons of tools already used by the panelists were shared. 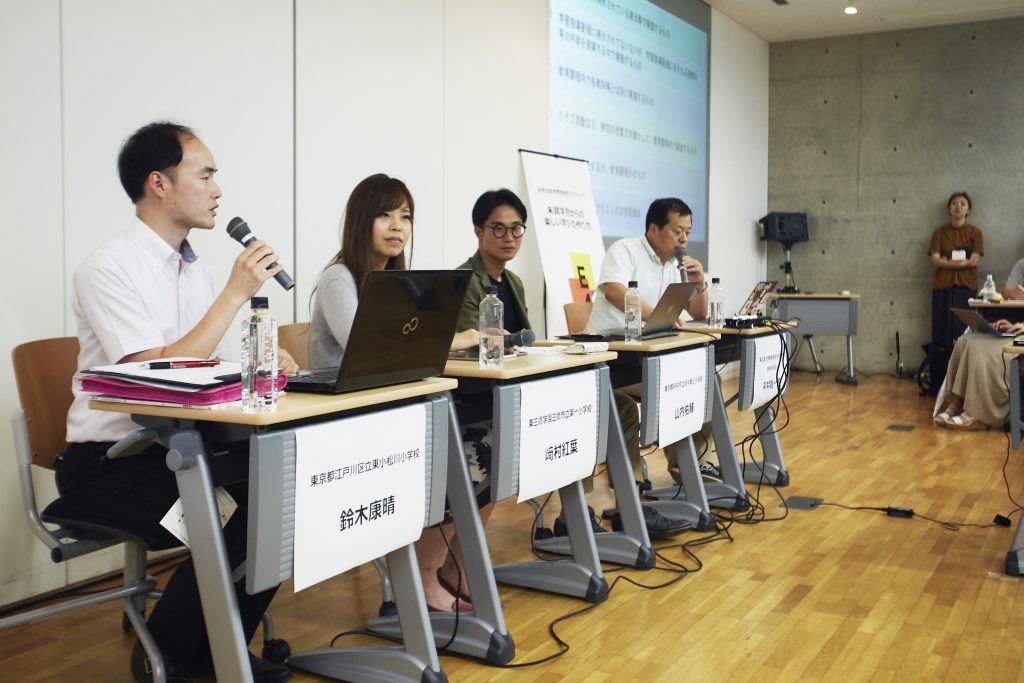 As for the reason why to teach programming, the main point was that the three essential skills for future job fields in relation to AI would be “communication”, “creativity”, and “specialization”. Examples were given on how to increase those skills in combination with a programming class, and at the end, Mr. Hirai concluded that the most important thing is to keep this motto in mind: “No excuses. Just go for it.” This earned the agreement of all the participants.

Ms. Sakimura Momiji, a specialist in arts at Mitaka City Daiichi Elementary School, presented class examples with 5th and 6th graders using MESH, little Bits and viscuit. In the class, the goal was to help the children become someone who can self-determine all the needed materials and the way to create something according to the image they have in their mind once they would reach middle school. She reported that by using programming in her classes, the children were able to broaden their horizons and expand their way of expressing themselves. 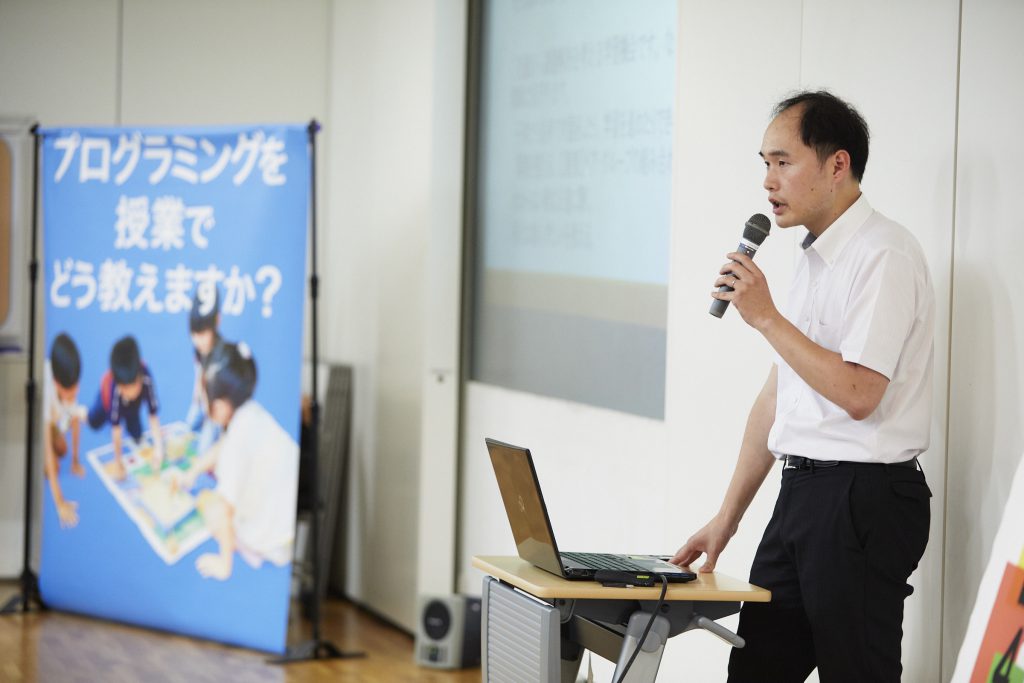 Mr. Yasuharu Suzuki from Higashi Komatsugawa Elementary School in Edogawa Ward presented practical examples of programming classes associated with each subject. In the language and practical life classes, examples of learning sequential thinking using strips were introduced, and examples of making traffic lights were introduced in science and synthesis. In Mr. Suzuki’s opinion, what children need in the future will be “the ability to know the computer’s mechanisms and make use of it in any situation”, and concerning the need for programming, his opinion is that the three points “Computers work according to programs. Programs are made by people. There are things computers are good at, and there are things they are not so good at.” should be learned by children through experiencing them and will give them a new way to understand the world. 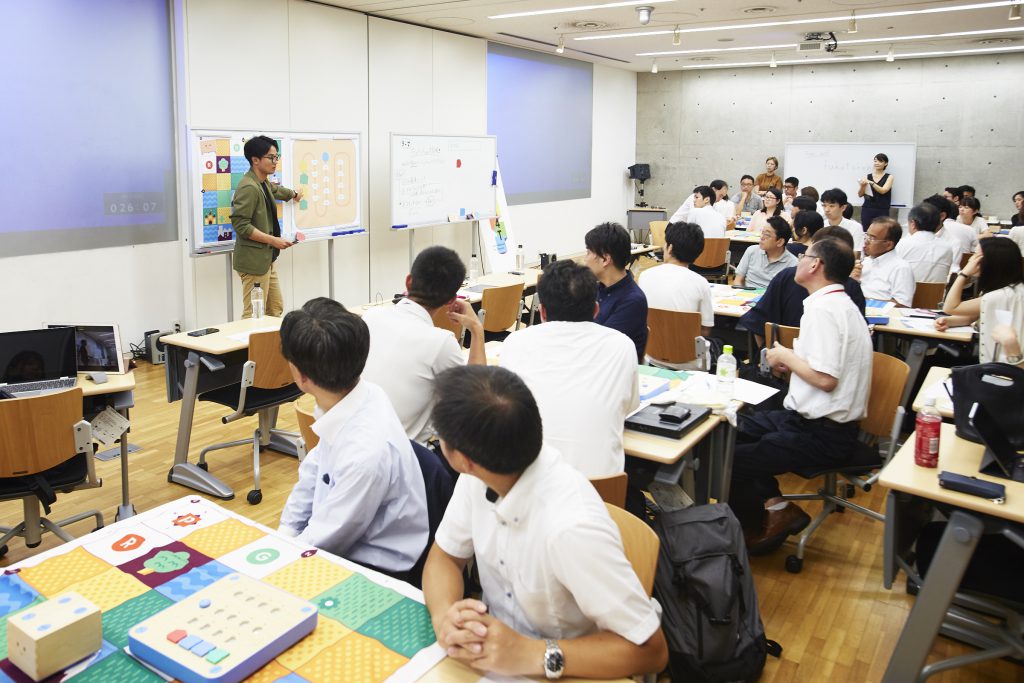 Mr. Yusuke Yamauchi, a teacher at Fuchu City Daisan Elementary School, conducted a mock class using Cubetto. Mr. Yamauchi values ​​a fun experience above all and has devised a class that allows children to discover the mechanisms of trial and error, and repeatedly tells children that it’s ok to make a lot of mistakes. 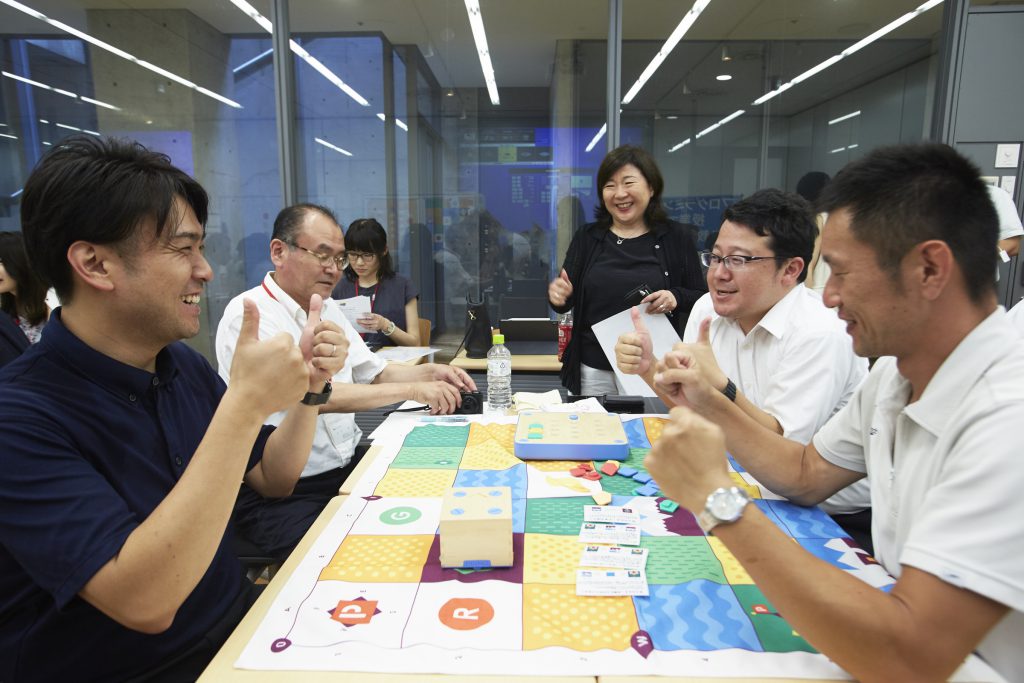 For the mock class, participants were sorted into groups of four people who had never met before, having to communicate and try to achieve the task through trial and error. After the experience, participants voiced opinions such as “This seems like it can help develop logical thinking”, “It’s a simple design and easy to operate, but it has depth” and “It looks cute so even teachers who don’t have experience with programming will not feel intimidated”. 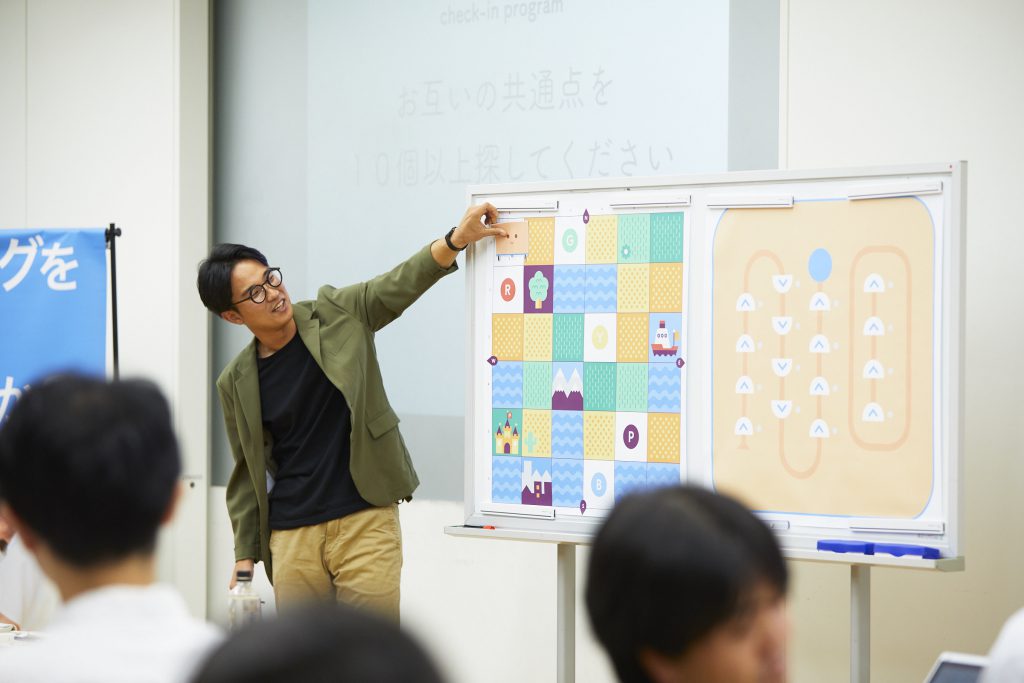 The “programming teaching material set” that Mr. Yamauchi used in the mock class is now on sale. A set of teaching materials for elementary schools, including a large blackboard explanation tool, a collection of teaching tips by subject according to the course of study, and an instructional DVD are also included. Teachers who are new to programming will be able to start lessons immediately, and it’s easy to use with many different class subjects.

Sharing practice examples and problem-solving tips through trial and error 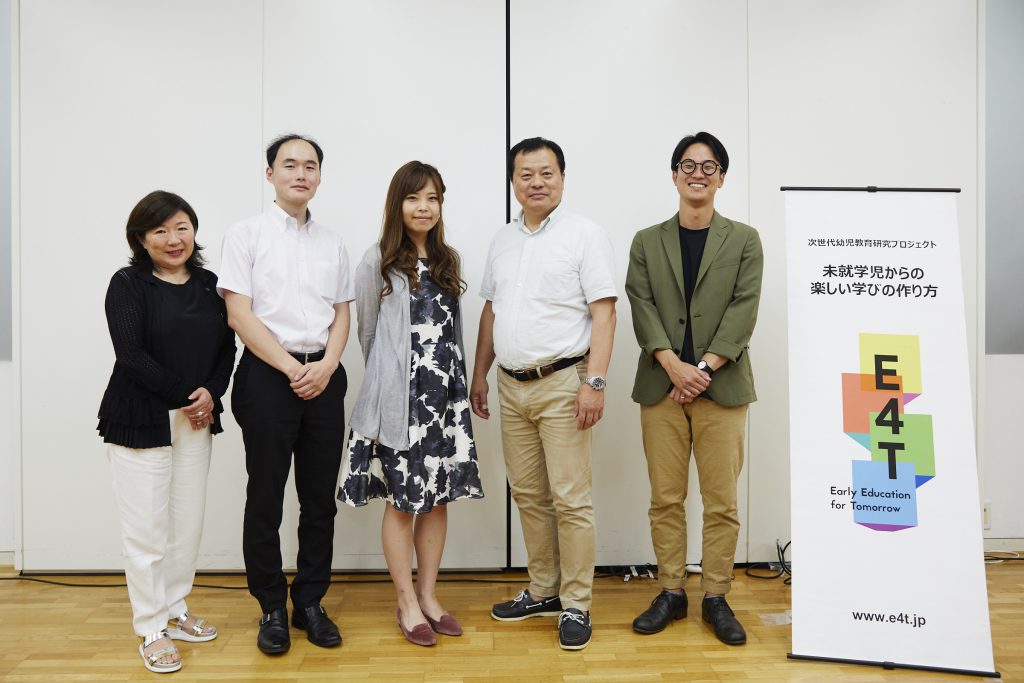 In response to the question of what to start with in programming education, the goal was to show the use of programming as a teaching aid rather than teaching programming as a subject itself from toddlers to elementary school. The idea is that programming can be a tool that will lower the threshold and make it easier to work on any subject.

Although there are various issues such as a school’s environment and budget, the best is to start with whatever is possible now, and then the next step will become visible on its own.